Joe Biden made history when he chose Kamala Harris as his running mate.

President Barack Obama gave a blistering speech criticizing President Donald Trump as a threat to democracy and Kamala Harris capped off the night with a speech in which she hailed influential women in her life, including her mother, and talked about her record as a prosecutor.

Are you registered to vote? Check now, request an early ballot

Obama accuses Trump of treating presidency like a ‘reality show’

Former President Barack Obama made his most scathing remarks to date about Trump, accusing him of neglecting his obligations to American citizens and of using the presidency to get “the attention he craves.” 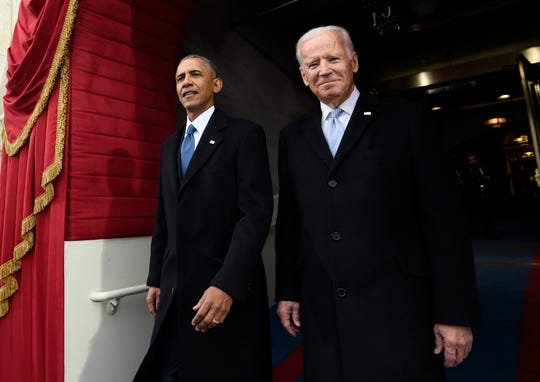 In this Jan. 20, 2017, file photo, President Barack Obama and Vice President Joe Biden arrive for the Presidential Inauguration of Donald Trump at the U.S. Capitol in Washington. Biden is releasing a video of his first in-person meeting with former President Obama since the coronavirus outbreak began, enlisting the former president to help slam his successor’s response to the pandemic. (Photo: Saul Loeb, AP)

“Donald Trump hasn’t grown into the job because he can’t,” said Obama, who delivered his speech standing in Philadelphia’s Museum of the American Revolution with the words of the Constitution behind him on the wall.

“And the consequences of that failure are severe. 170,000 Americans dead. Millions of jobs gone,” Obama said. “Our worst impulses unleashed, our proud reputation around the world badly diminished, and our democratic institutions threatened like never before.”

One of the biggest moments of the night came as Sen. Kamala Harris, D-Calif., officially accepted the vice presidential nomination to run on the ticket in November, becoming the first Black woman and first Asian American woman to appear on a major presidential party ticket.

She spoke at length about her mother, Shyamala Gopalan Harris, a doctor and single mother who, Harris said, raised her daughters to be “strong Black women” who were also “proud of our Indian heritage.”

She said her mother instilled in her values including “a vision of our nation as a beloved community – where all are welcome, no matter what we look like, where we come from, or who we love. A country where we may not agree on every detail, but we are united by the fundamental belief that every human being is of infinite worth, deserving of compassion, dignity and respect.”

She discussed her record as a prosecutor, saying she had taken on big banks and gang members and fought for children and survivors of sexual assault.

In a pointed moment, she said, “I know a predator when I see one.”

She said that vision of our country “feels distant” due to Trump’s leadership. She slammed his leadership, saying it was marked by “chaos” and “callousness.”

Hillary Clinton, the former secretary of state and 2016 presidential nominee, discussed the election four years ago in which she won the popular vote but was defeated by President Donald Trump in the Electoral College.

Polls ahead of the election had shown her ahead of Trump but she narrowly lost the battleground states of Pennsylvania, Michigan and Wisconsin that had backed Democrats for decades. She urged people to vote in November and said no one should take the outcome for granted.

“For four years, people have said to me, ‘I didn’t realize how dangerous he was.’ ‘I wish I could go back and do it over.’ Or worst, ‘I should have voted,'” Clinton said. “Well, this can’t be another woulda coulda shoulda election.”

“Remember: Joe and Kamala can win 3 million more votes and still lose. Take it from me,” she said. “We need numbers so overwhelming Trump can’t sneak or steal his way to victory.”

Clinton blasted Trump, saying he had failed the country.

Clinton, who would have been the country’s first woman president had she been elected, also talked about the importance of breaking down barriers. 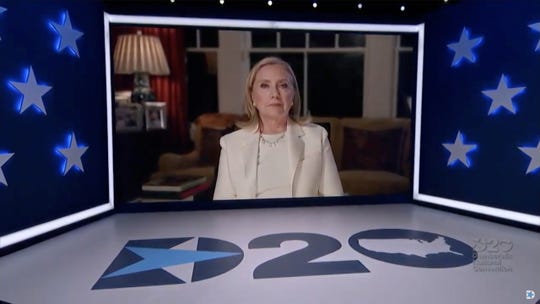 In this screenshot from the DNCCs livestream of the 2020 Democratic National Convention, former first lady and Secretary of State Hillary Clinton addresses the virtual convention on August 19, 2020. (Photo: Handout, DNCC via Getty Images)

Sen. Elizabeth Warren, D-Mass., pitched Biden to progressive voters by highlighting some of his policy proposals.

“I love a good plan, and Joe Biden has some really good plan s— plans to bring back union jobs in manufacturing and create new union jobs in clean energy,” said Warren, a primary rival to Biden who had touted her own detailed policy plans.

“(Biden has) plans to increase Social Security benefits, cancel billions in student loan debt, and make our bankruptcy laws work for families instead of the creditors who cheat them,” she said.

Warren promoted Biden’s child-care platform, pledging that he would “make high-quality child care affordable for every family, make preschool universal, and raise the wages for every child care worker.”

A mother whose son was hit by a stray bullet and former Rep. Gabby Giffords, who survived being shot in the head, headlined a powerful segment Wednesday about gun violence and the mass shootings over the years that have killed school children, nightclub patrons, moviegoers and shoppers at grocery stores.

DeAndra Dycus shared how one bullet has forever changed her life and that of her son, who was shot while dancing at a friend’s birthday party at age 13. Her son, DeAndre, is now a nonverbal quadriplegic.

“My Dre does not talk. He does not walk,” she said. “I know he knows me by the smile he shows when I walk in his room, but I’m unsure if he knows a gunshot has changed his life.”

Giffords, who was shot while in office in a 2011 assassination attempt during an event in Tucson, Ariz. and still struggles with speaking and walking, told convention supporters about her fight to recover and the need to stand up and show grit.

“My recovery is a daily fight, but fighting makes me stronger,” she said. “Words that once came easily, today, I struggle to speak, but I have not lost my voice.”

She urged changes to gun laws and backed Biden, saying he was “on the right side of history” with his policies.

Gabby Giffords: What I learned fighting for my life. And why it can help America now.

Before her remarks noting the history of her career and the work of House Democrats that is frequently opposed by the GOP-controlled Senate, the DNC aired a video highlighting Pelosi’s rise in politics and the historic path she has paved, a passage that has helped other women rise in politics as well.

The video included pivotal moments from Pelosi’s career, including her declaration that they had “broken the marble ceiling” after she was elected Speaker of the House, the first woman to do so.

But then the calm music that carried behind the video changed.

“But not everyone was on board,” a narrator said, as rock music started to play and Trump appeared on screen saying Pelosi’s name repeatedly.

The video then showed a montage chronicling the tensions between Trump and Pelosi and some of the moments that went viral, including her saying the president was having a “temper tantrum” after a White House meeting.

In her remarks, Pelosi said more women were needed in elected office. She also expressed her dismay with the president.

“As speaker, I’ve seen firsthand Donald Trump’s disrespect for facts, for working families, and for women in particular – disrespect written into his policies toward our health and our rights, not just his conduct,” Pelosi said. “But we know what he doesn’t: that when women succeed, America succeeds.”

Undocumented immigrants and their families spoke about family separation policies under the Trump administration.

Estela, an 11-year-old whose mother was deported, read from a letter criticizing Trump’s immigration policies. “My mom is gone, and she’s been taken away from us,” she said. “Every day that passes, you deport more moms and dad and take them away from kids like me.”

“We are American families. We need a president who will bring people together, not tear them apart. Sincerely, Estela,” she said.

The segment also featured remarks from Sylvia, a young person brought to the country as a child. Sylvia’s mother, who also appeared in the clip, came to America undocumented in order to seek medical care for her daughter.

“I was born with spina bifida, which means my spinal cord didn’t form like it should have,” Sylvia said. “My mother did what any mother would do to save her life.”

The National for October 5

Coronavirus live news: WHO says ‘don’t panic’, all will get Covid...